No Tech For ICE: Librarians in Action

Librarians have been key players in our fight to demand #NoTechForICE.

Members of the library community are deeply concerned about the role that data brokers like LexisNexis play in human rights abuses against immigrant communities. Join us in demanding that these companies do the right thing and end their contracts with ICE.

LexisNexis has been making millions of dollars selling ICE surveillance tools used in their deportations.

We are librarians, deeply concerned about the human rights abuses facilitated by LexisNexis, who are asking the company to stop aiding this anti-immigrant crackdown.

Join with almost 2,000 other librarians, legal professionals, and law students who are asking LexisNexis to stop facilitating deportations and cut its contracts with ICE.

Access to this data is sold to ICE, which currently has a $22.1 million contract to pay for LexisNexis’s services. Its current contract with ICE, signed in March 2021, provides the agency access to a massive database with “10,000 different data points on hundreds of millions of people.”

This data is used widely for deportations across the country: New documents released by Mijente just last month showed that LexisNexis was used by ICE more than 1.2 million times over a seven-month period, by agents searching for individuals, phones, vehicles, and much more. 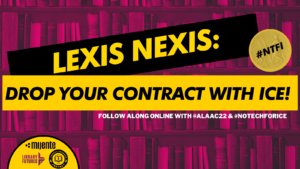 ICE has also contracted with LexisNexis specifically for the purpose of skirting existing sanctuary protections—laws in cities and states across the country that are meant to limit cooperation between local police and immigration agents.

In government contracting documents released by Mijente, ICE has said it is explicitly contracting with LexisNexis to skirt these laws, buying jail booking data from the company directly instead of relying on police cooperation. It is being investigated for these practices in Chicago, where lawmakers have asked for a public hearing into how LexisNexis and other data brokers may facilitate violations of the city’s sanctuary policies.

Did you know that LexisNexis, one of the biggest electronic resource vendors in the library world and a crucial database for legal education, has multimillion dollar contracts with Immigrations and Customs Enforcement (ICE)?

Through RELX’s partnership, ICE can obtain information pulled from tens of millions of commercial data, court, probation and parole records, as well as real-time booking and release information from thousands of jails across the US. ICE uses this data to surveil, detain, and deport undocumented people in our communities.

Sanctuary laws and policies are supposed to limit or prevent this kind of sensitive information sharing with immigration enforcement. But ICE is going around these protections by contracting directly with private data brokers like LexisNexis. This threatens our most vulnerable community members and undermines civil and democratic rights.

In April, we exposed how a national $22.1 million contract provides personal information on hundreds of millions of people throughout the country to Immigration and Customs Enforcement (ICE). Mijente and the Colorado Immigrant Rights Coalition (CIRC) released Sabotaging Sanctuary, a report about how ICE uses this information from data brokers to circumvent sanctuary policies in Colorado.

Our report reveals how ICE contracted with a data broker company (Appriss Solutions, a subsidiary of LexisNexis) to receive jail-booking data from a Colorado jail alert system called VINE, which is run by the County Sheriffs of Colorado. This gave ICE real-time jail booking data in a state where sanctuary laws are meant to prohibit cooperation between the police and immigration enforcement.

It also revealed glaring conflicts of interest among Colorado law enforcement officials—the same officials who were meant to uphold the state’s sanctuary protections sat on the board of the company contracted by ICE explicitly to skirt those protections. To learn more, you can check out the Sabotaging Sanctuary webinar here. 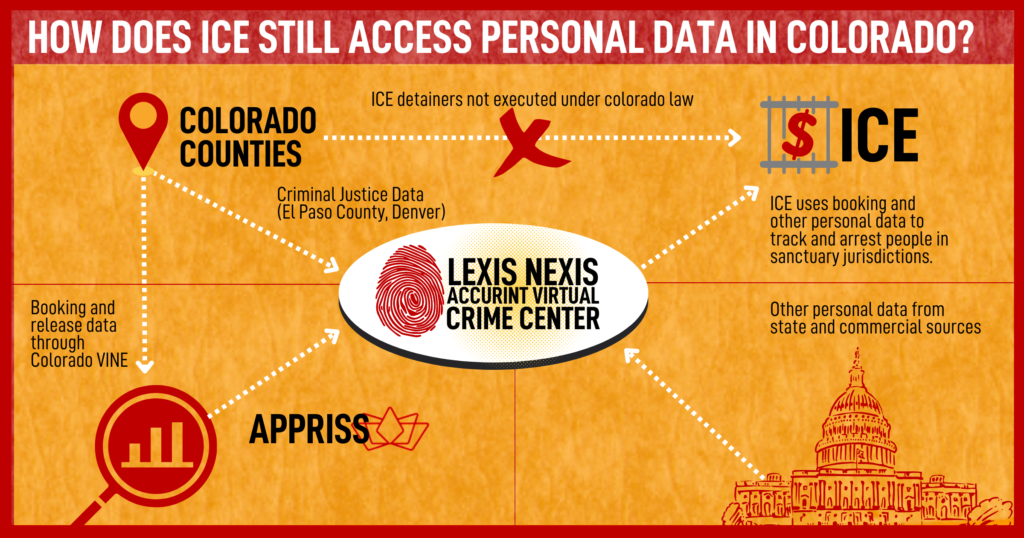 Contact your LexisNexis representative in your own words or using the following script:

I’m a library worker, and I recently learned about LexisNexis’ data-sharing agreement with ICE. This partnership is unjust and unethical. Data is used to detain and deport community members, fueling family separation and broken lives. This data agreement goes against local sanctuary protections and violates library values of privacy and confidentiality. The library community is outraged that LexisNexis would enter into this partnership, and we urge you to do the right thing and cancel these contracts.

Note: If you’re not sure how to contact your LexisNexis rep, try this directory of reps for US law schools: 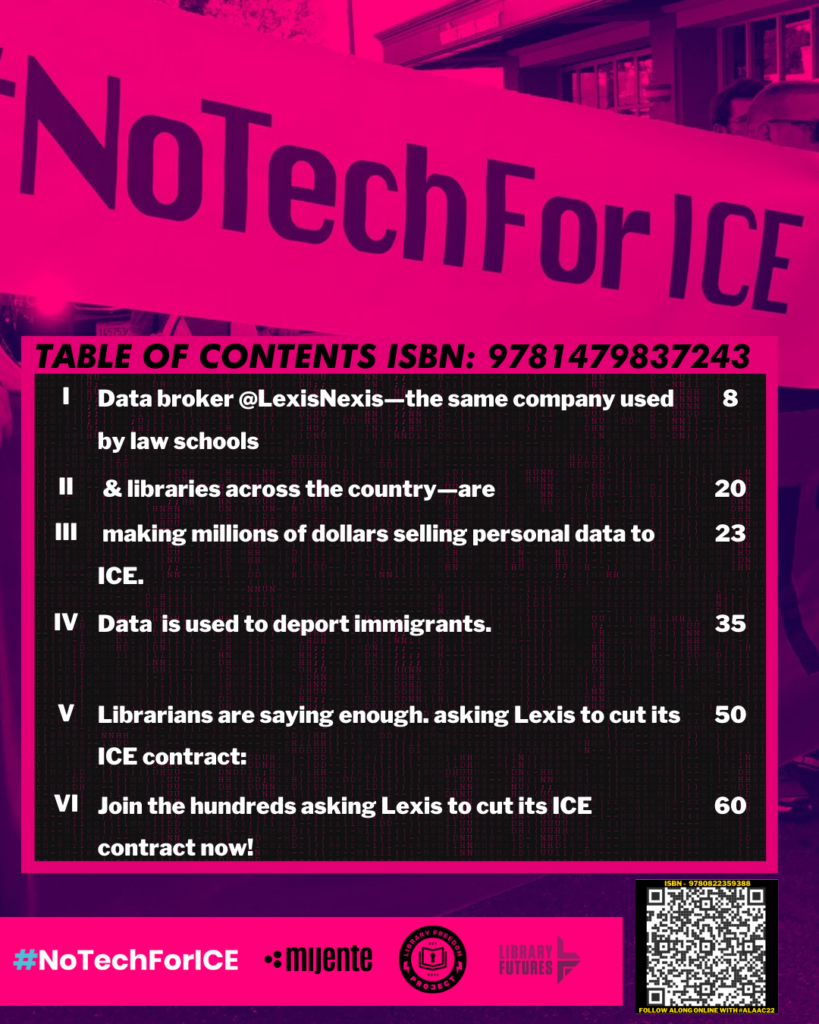 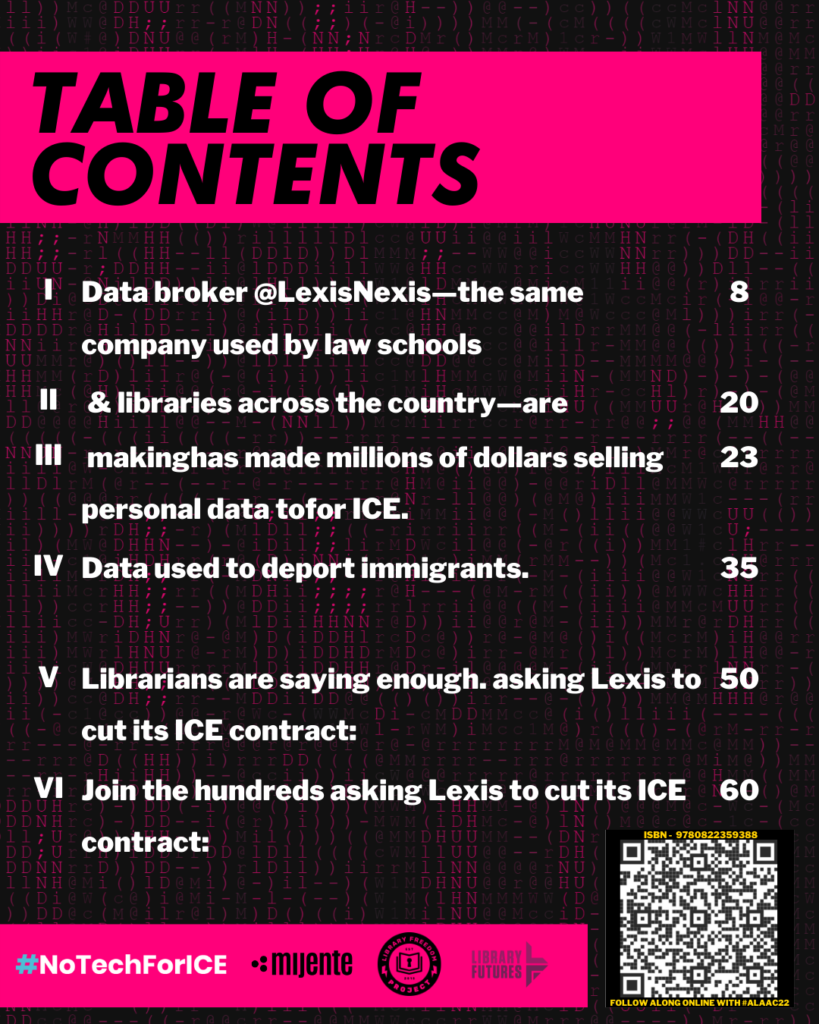 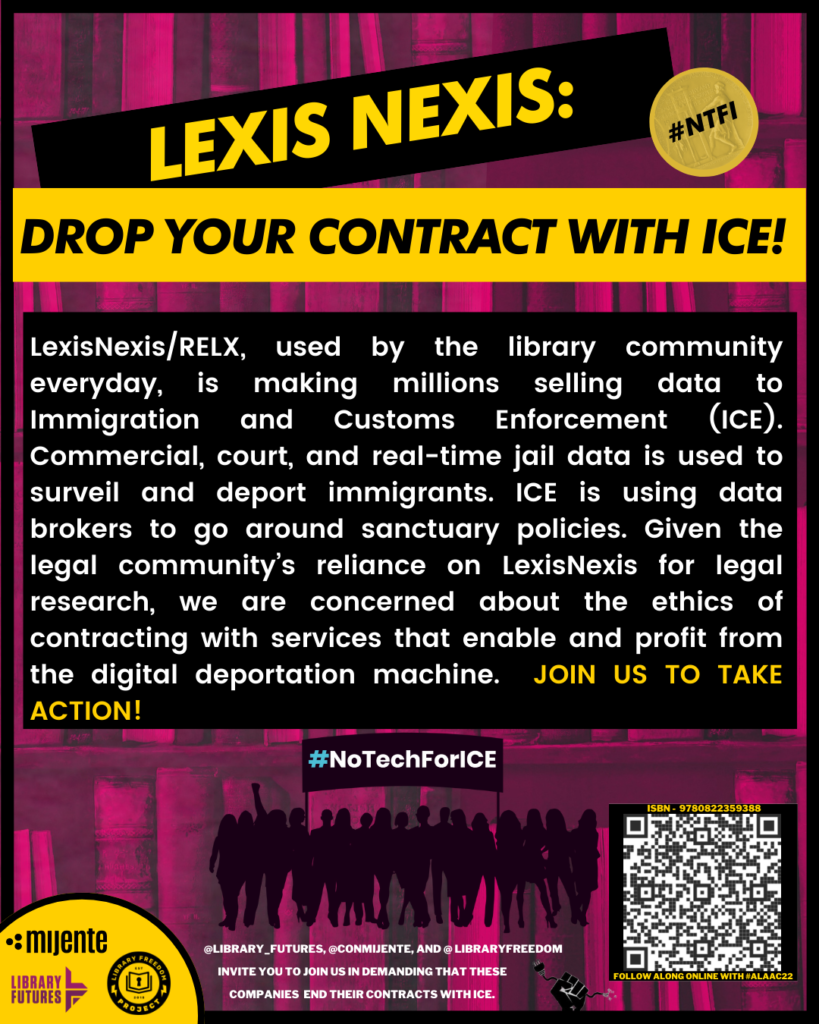 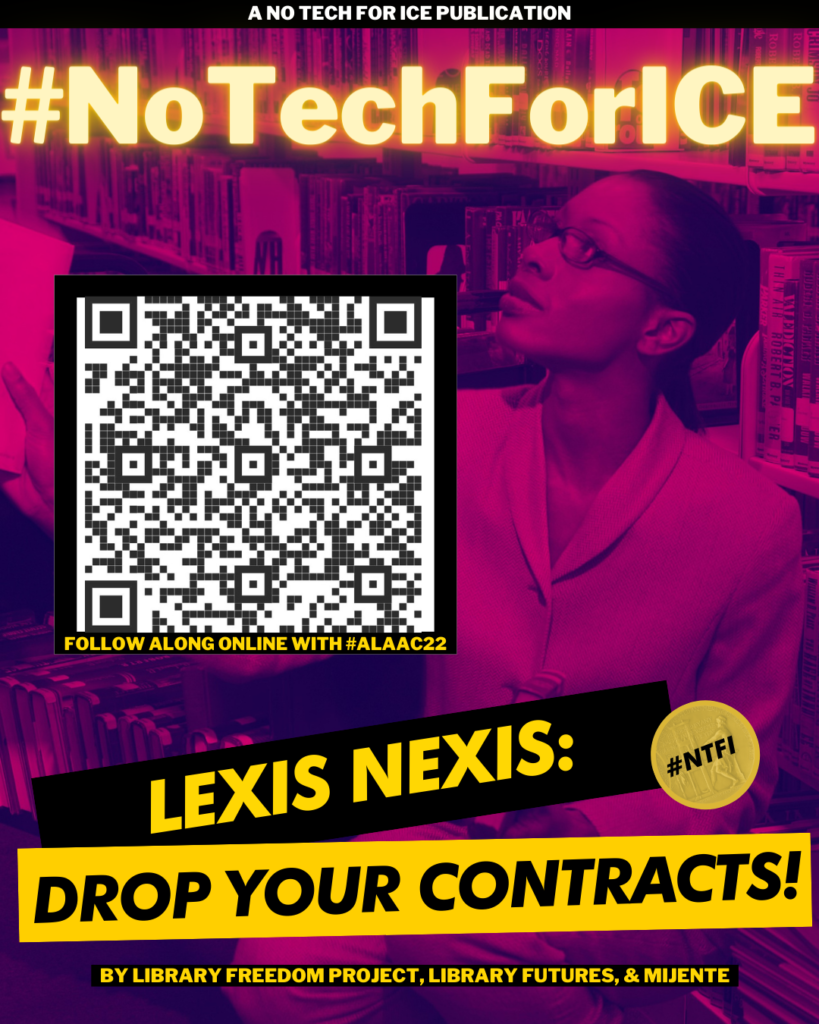 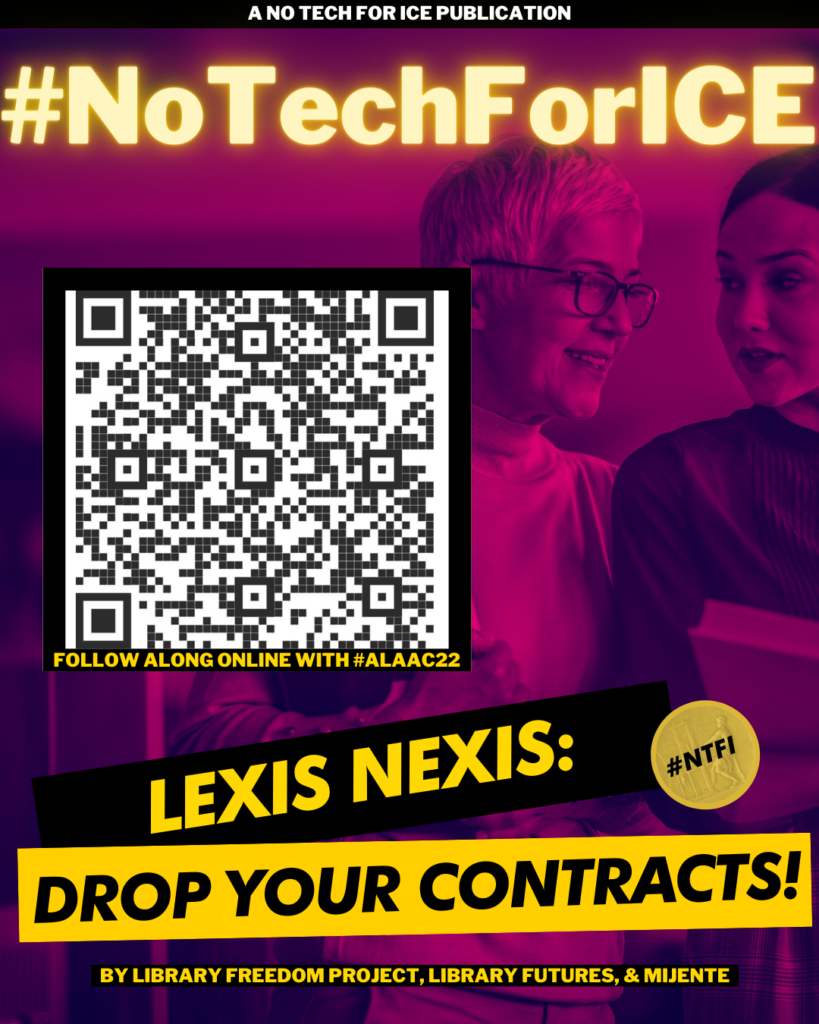 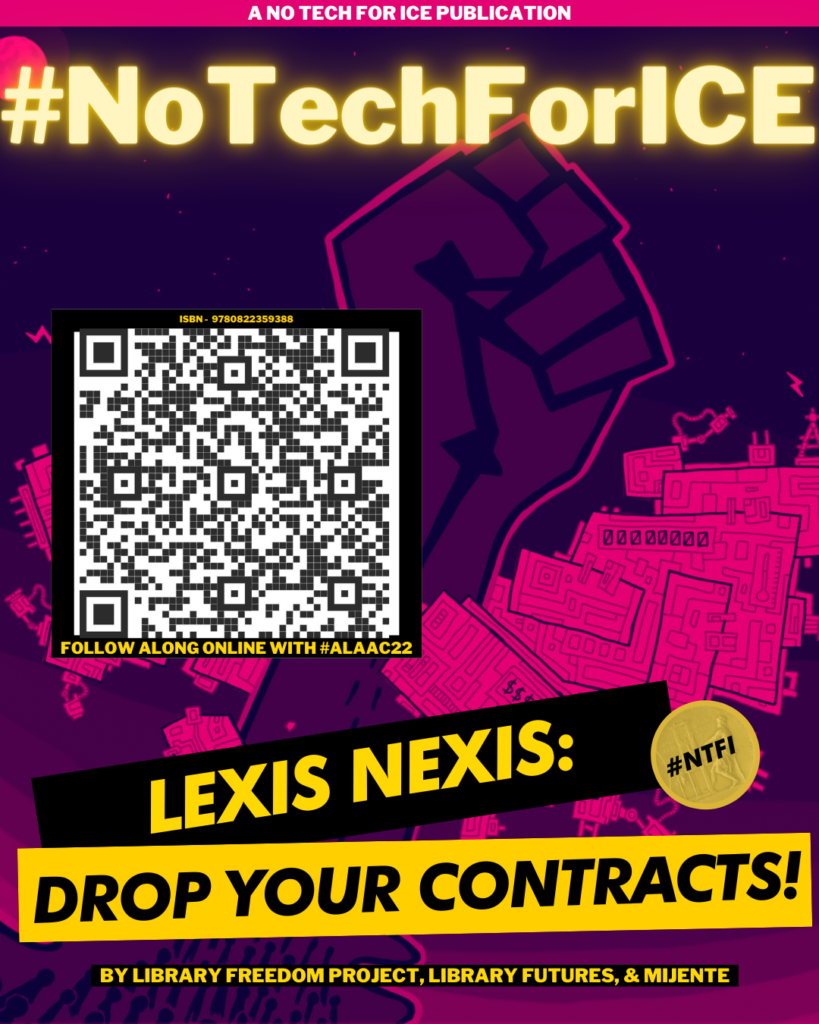 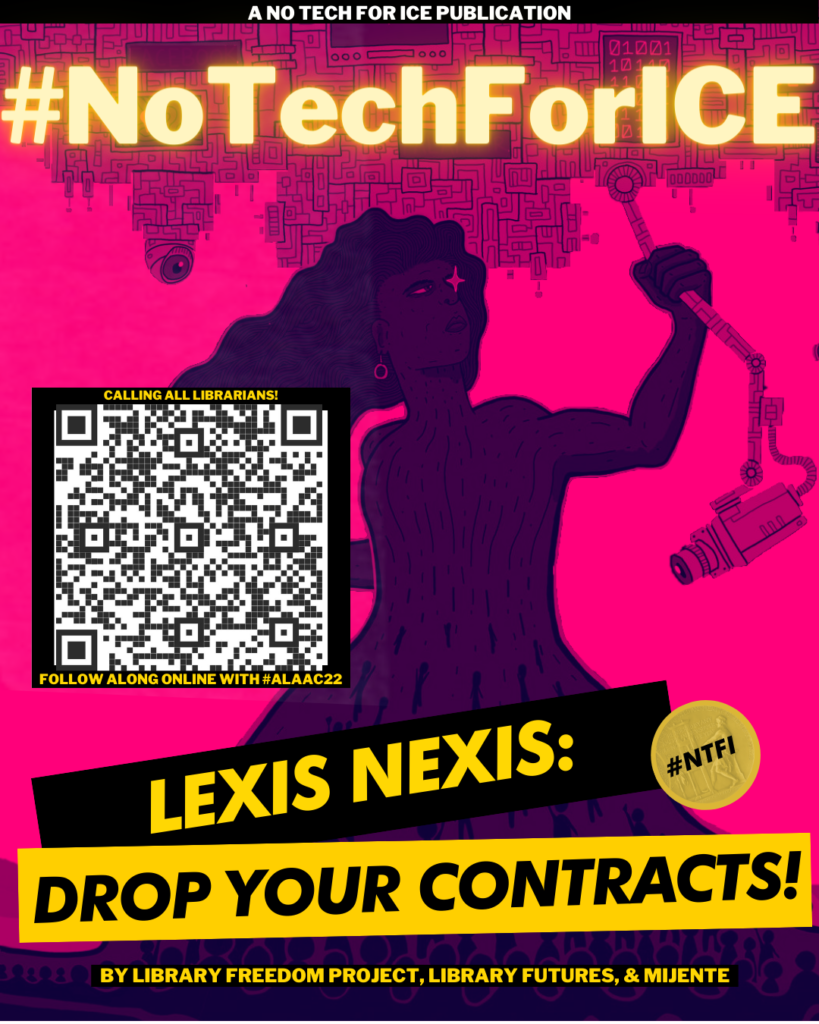 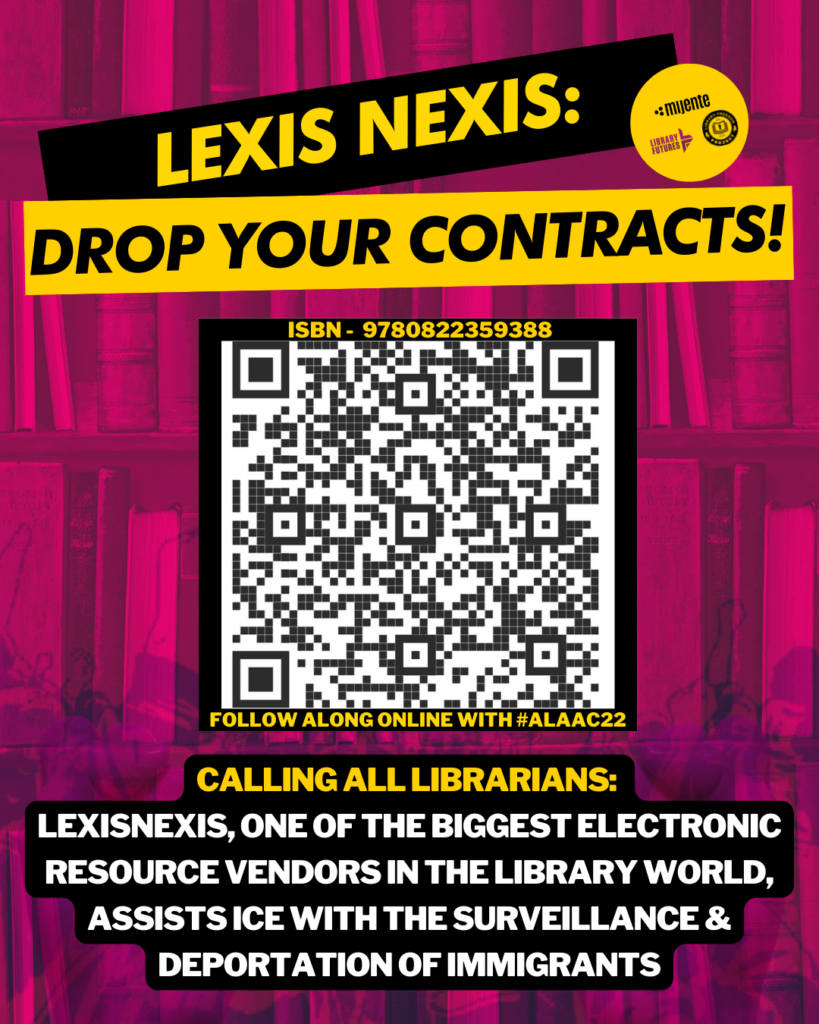 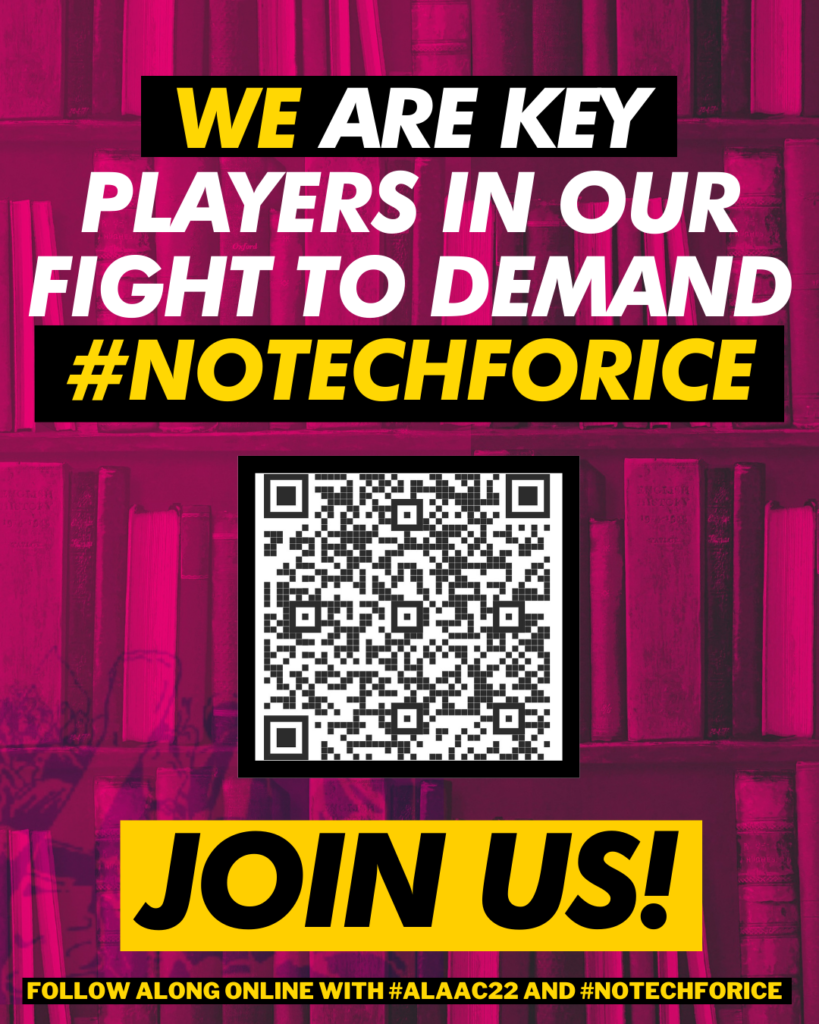