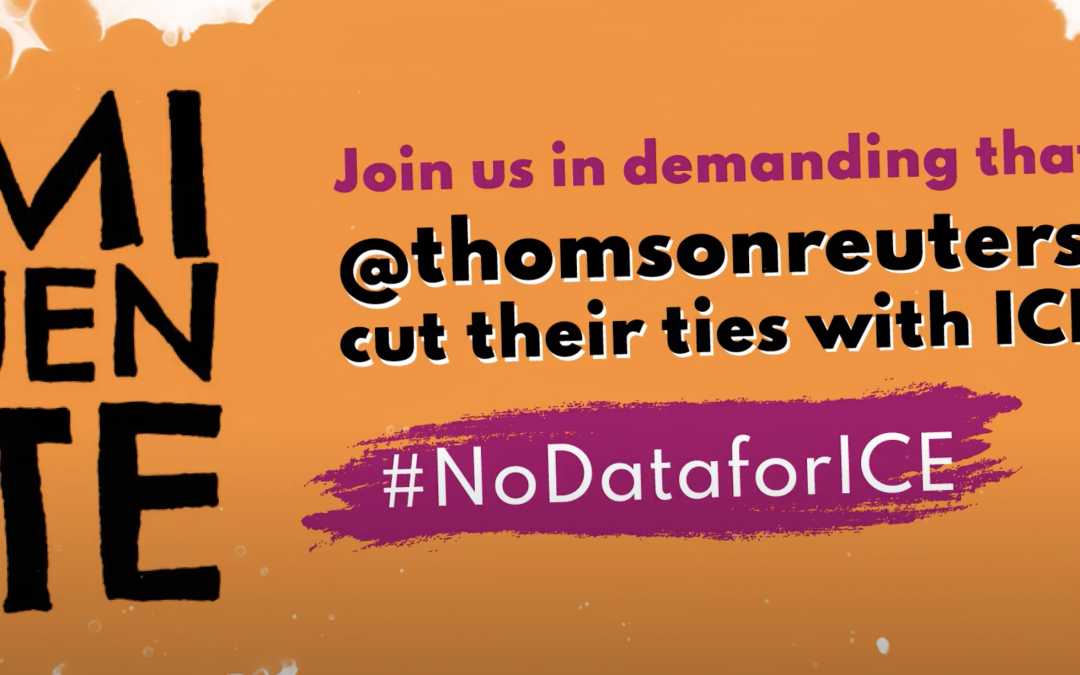 Thomson Reuters, the Canadian multinational media conglomerate that owns the news agency Reuters and other subsidiaries, is fine-tuning target lists of immigrants for deportation by the federal government, according to government contracts the company holds with Immigration and Customs Enforcement.

Thomson Reuters also has a $4 million contract for “risk mitigation services” that purportedly allow ICE to track threats against their agents, but in reality are frequently used to retaliate against undocumented immigrant activists and others who protest ICE’s activities.

Thomson Reuter Special Services and ICE have a tight-knit corporate relationship, raising questions of inside access and corruption. The company’s CEO sits on the board of the ICE Foundation, a non-profit set up to support ICE employees, alongside executives from companies like GEO Group and Booz Allen Hamilton that also have large ICE contracts.

Unlike other government contractors, Thomson Reuters — which has received over $70 million in ICE contracts — is not a passive data broker that sells personal data to ICE. The company tailors its operations to ICE’s needs and helps the agency target individuals with both automated analysis and in-house human analysts, according to the documents.

“Specifically, [Enforcement and Removal Operations] data must be analyzed internally [by the contractor] by both automation and trained analysts with research support tools to provide the best leads possible and to reduce the number of false positives forwarded to the [Targeting Operations Division],” the document reads, referring to divisions within ICE.

Thomson Reuters has been known as an ICE contractor for some time, principally through its provision of its CLEAR software, a contract called “mission critical” by the government. CLEAR automatically collects information from myriad databases across the country — public and private. This gives ICE access to personal information like utility bills, phone records, social media posts, property records, criminal and arrest records, business data, healthcare data, license plate scans, and much more.

Laws exist to limit the federal government’s ability to procure this kind of data on its own, preventing it from directly buying or storing certain records, for example. But these laws do not apply to Thomson Reuters and, because ICE buys its data from the company, it can circumvent these laws.

This data is then used by ICE agents to terrorize entire immigrant communities, like one in Washington state, as recently documented by New York Times Magazine. There, ICE agents used CLEAR to “disappear” over a hundred people over several months in operations that instilled terror through sudden disappearances. People were arrested outside their homes or walking down the street.

One woman, attempting to meet someone to buy her piñata for $20, was arrested outside her bank after using Facebook to communicate with the buyer — likely an ICE agent.

But there has been little focus on the in-house support given to ICE by Thomson Reuters staff, which details a level of custom support outside the normal relationship between contractor and government agency.

As of September 2018, Thomson Reuters Special Services has also provided its risk mitigation services to ICE, described in government documents as having the following purpose: “The primary intent of this effort is the search of electronic information contained in databases proprietary to TRSS to identify possible threats and risks associated with ICE personnel.” CLEAR and other proprietary databases are used for this work.

The links between Thomson Reuters and ICE also extend into the C-suite. The CEO of Thomson Reuters Special Services, Stephen Rubley, sits on the board of the ICE Foundation, a non-profit that supports ICE employees and holds events at ICE headquarters, according to the non-profit’s latest tax filings. Rubley sits on the board alongside other executives of companies that work with ICE, like private prison maker GEO Group. Past reporting has revealed how companies like Thomson Reuters have benefitted from this arrangement, including the company’s win of a no-bid contract with ICE worth $1.5 million.

Furthermore, TRSS President Jim Dinkins was also a long-time ICE executive before joining Thomson Reuters, helping to create the agency’s Homeland Security Investigations division in 2010, the division of ICE that leads workplace investigations, which have quadrupled under the Trump administration.

Dinkins served as TCE Special Agent in Charge of Baltimore from 2006 to 2008 and Washington, D.C. from 2008 to 2010. He later served as the HSI Executive Associate Director from 2010 to 2014, before moving directly onto a senior executive position at Thomson Reuters, where he became president of TRSS in June 2019.